Revit does the Classics

I have been working on a new book project for several months now. I have always had a strong interest in classical architecture. I especially like the challenge of modeling such traditional forms with today’s modern software. I am also particularly struck by the irony of how such forms actually prove quite challenging to model using computer software. 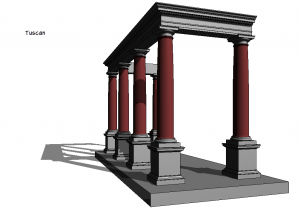 I actually began my first explorations of this kind of thing back several years ago using AutoCAD Architecture. I have a very detailed Ionic column capital that built using ACA objects. I was able to get a pretty decent results but it suffered from being a very “heavy” model with lots of tessellation. But it was not just an AutoCAD block. I built it as an ACA Style and it had some parametric qualities. I was even able to get a 3D print of it (thanks to Zach Kron of Buildz fame). 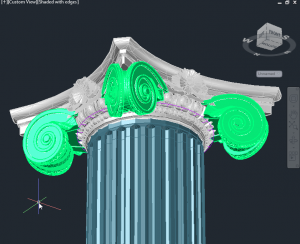 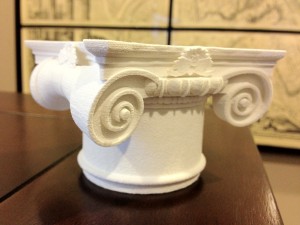 I left the project on the back burner for a while and picked up again about a year or two ago only this time in Revit. My goal was to create not just one column, but all of the major orders and make them fully parametric Families. Since everything in classical architecture relies heavily on proportion, it seemed like a really nice challenge for the Family Editor. 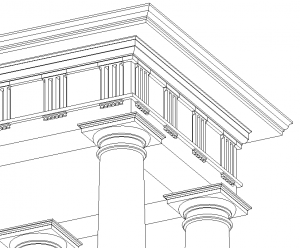 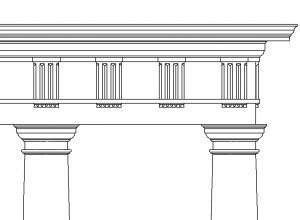 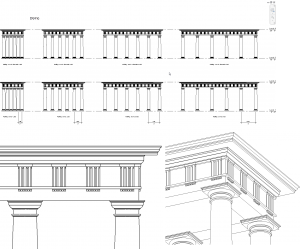 One limitation that I ran into early on is Revit’s inability to scale native geometry. It is rather ironic actually, because if import AutoCAD geometry into Revit, there is a scale property in the Type Properties dialog. But no such think for native solids. Therefore, I was forced to instead scale each piece of the sketches individually. This means that scale a simple box, you need three parameters: length width and height. To scale them proportionally, you need to apply formulas to at least two of those dimensions. This is not too big of a deal unless you are dealing with very complex and curvaceous forms. Like say the volutes on an ionic column, the flutes on a column shaft or the acanthus leaves on a Corinthian capital. 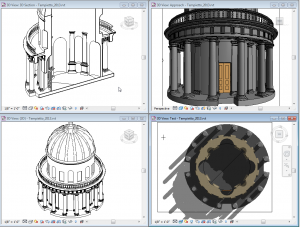 I tried to stick with the traditional Family Editor because even though you can change the category of an Adaptive Component, I still don’t like that you cannot copy and paste between them and traditional families and that you cannot nest an adaptive into a traditional family. But despite this, I found that an adaptive was really the best choice for the Corinthian. With access to splines and points, you gain more modeling freedom and things like the leaves were MUCH easier to build this way. Zach Kron was also a big help here in giving me a very useful tip to scale my leaves proportionally without having to create a million parameters. So thanks a bunch for that tip Zach! Basically all you have to do is host your points on your Reference Lines and then scale the Reference Lines with a simple Length, Width and height parameter. Works really well. Couple that with 2013’s new Divide and Repeat feature and we can avoid lots of cumbersome arrays. I like that a lot too.

The project has indeed grown beyond my original scope and become significantly more involved. As a consequence, as I work through building fully parametric models of Tuscan, Doric, Ionic and Corinthian columns and colonnades, I decided that I would like to share a little bit of work in progress to gauge the general interest in this project. My aim is to see what sort of general interest there is in a book and/or videos on the subject. While the focus is certainly on modeling at this stage, I would like to see it expand to encompass more aspects of advanced Family Editor techniques.

Throughout this post have been some images of what I have so far. Everything flexes and can scale to different sizes. Naturally none of it is complete yet, but I am making progress. 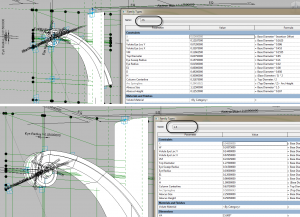 Now I should also mention that most of the work so far has been on the high (Fine) detail versions. I fully intend to create a course and probably a medium detail version of each family as well. Here is a simple version for the Corinthian. 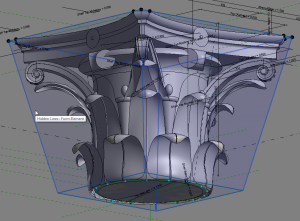 If you have any comments at all on the project, I am most interested to hear them. I am curious in the level of interest in an eventual book, but also interested in any other comments or suggestions that folks might have. So please feel free to share your thoughts. Thanks!

Swept blend approach. Form is OK, but not very smooth. 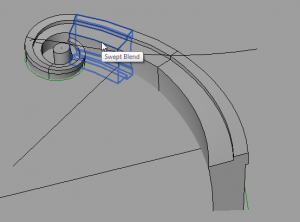 53 Responses to Revit does the Classics