And now an apology:

David Koch has been a longtime contributor to the AutoCAD Architecture book. He has assisted me in at least the last three editions. This year, I worked on four books and David took on the lion’s share of the work for the AutoCAD Architecture book. David is compensated for his efforts, but I had intended to also reward him by placing his name as a contributor on the cover of the book. 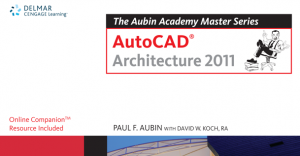 Alas, it appears there has been an oversight at the publisher and this did not occur. My apologies David, you really deserve the recognition. I will make certain that this does not happen again next year.