Some days you start out with your agenda and your planned activities for the day and you know exactly what you plan to do that day. Sometimes things even go according to plan. My favorite outcome here is when i get to check things off that ever-present to do list. Other days, you have your plan but the minute you sit down to your desk, something unexpected comes along to “change” the plan. Today, mom called with a burst water pipe and the associated mess, and Andy Milburn posted a rather long and thoughtful missive about Corinthian columns and Revit. If you are not familiar with Andy’s Shades of Grey blog, it is fantastic. You definitely want to add it to your read list.

Well, I don’t think I will get quite as long and thoughtful as Andy did in this post, but he asks a few specific questions that I thought I would address. First, I love the photos Andy. You captured really nice variety there. And you raised some fantastic questions like: “The spirit of the corinthian seems to live in it’s infinite ability to be constantly re-invented. How do you factor that into an equation ?” and “And how could a Revit family that resizes itself on cue to a few typed numbers hope to join such a tradition ?” I asked myself these same questions and while I did take some photos, I suppose I took a more academic approach to the project. As my primary source material, I am using “The Classical Orders of Architecture” by Robert Chitham. I have a copy of the first edition. There was a second edition published in the mid nineties. It seems to only now be available online or in used outlets.

What I love about Chitham’s book is he seemed to be asking the same question about variation. He took all of the previous treatises and put them side by side and in so doing came up with a sort of “idealized” set of orders based on the features of all the other masters like Vitruvius, Vignola, Gibbs and so on.

From The Classical Orders of Architecture by Robert Chitham

Perhaps it could be construed as lazy on my part to have simply accepted Chitham’s explorations and idealized interpretation when setting out to make my classical Revit families. However, like Andy points out, with so much variation possible, how can we hope to create a parametric model that accommodates that? I am not sure that we can frankly. So this is not the goal that I set for myself. My goal was to create the “idealized” version of the capital, and make it fully parametric. Where that leads me is still ongoing. When it is finished, I have no doubt that the next logical step will present itself. Also, as has been asked in comment on previous posts and also raised in Andy’s post, level of detail is an important aspect of a project like this. In yesterday’s Vasari Talk; Pumpkin Postmortem, we talked about limitations of this work and file size and the implications of highly detailed and repeated models. So a Course level of detail version and use of detailing and other techniques would be essential to using objects like this in a real project of any significant size. I have already begun to add lower level of detail versions and fully intend to have them in the final products.

One final point, Andy also raised the issue of the volute scrolls and how they meet at the corners. I struggled quite a bit with this. In fact, I have not yet developed the secondary scroll yet. I have however built the leaves (coliuli and flourets) that rise up beneath them. With those I approached them in much the way that Andy discusses. So it is interesting that we are thinking of the same things here. With the main scroll, I was intending to create a void near the top to cut out hollow material and make it appear like two coming together. However, I am not yet complete satisfied with the overall form, so I left it for now. We’ll see how that goes. 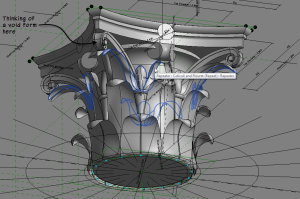 Latest version of the Corinthian

So Thank you Andy for disrupting my morning routine. 🙂

No seriously, I was due for a post anyhow, so sincerely, thank you for the kick in the pants…

Now off to Mom’s to help her clean up the mess. More to come….