I have been working on a “little” backyard project this past week. About a month and a half ago, we had our above ground swimming pool removed. It was a 21 foot round pool. So we were left with a 21 foot round hole in the backyard. It seemed a shame to just fill it in and put sod over it, so I decided to build a patio. After getting some price quotes that were a little out of my budget I decided to do the work myself (what did I commit myself to?).

Now I don’t know how often people use Revit to create their patio plans, but if Steve Stafford can do his PowerPoint slides in Revit, then doing a patio plan in Revit does not seem all that strange? Right? So you might be thinking, well there isn’t that much to plan, it’s a circle and it’s flat. Just do a sketch or pull out a calculator. True, but there is a change in grade, so we have steps on one side, and I did some future planning as well. For example, next year I hope to add a pergola. So I modeled that to see how it would all work out. Anyhow, it’s not like I was going to do it in AutoCAD or something…

So, on to the BIM part of the story. I needed to order materials so I needed quantities. Naturally, I could just pull out a calculator and a sketch pad and the formula for a circle. A little bit of quick math and you have the square footage, circumference, etc. Add 10% and off I go. In fact the guys at the home store I am sure would have done that for me no problem. But I wanted to have as accurate a count of each item as possible. So, what to do? Well how about a quick mock-up in the massing environment? Overkill? Maybe. But it turns out that in doing it this way, my numbers were almost dead on. 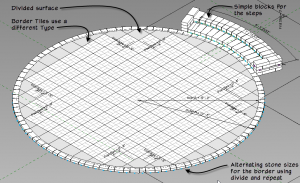 Patio laid out in the massing environment

Building the model was pretty simple. A circular surface, divide the surface using a rectangular pattern. Next create a custom pattern-based family for the individual paver stones. (Side note: I used Hatch-22 to make the custom pattern you see in the image). I then selected the surface, and on the Properties palette, made sure that the Border Tiles used the “Partial” option. I created a new type for my pattern-based family that used a simple cross hatch and had a different name. This way, I could easily see which tiles needed to be cut, and how many cut tiles I would have. To apply this “cut” tile type, right click the divided surface and choose Select all border components. A nice side benefit is that this made visualization easier. Therefore it was easier to shift the pattern around to get it centered the way I wanted.

To build the steps, it was basically like building lego blocks for the side walls and just a generic model repeated along a curved path for the steps themselves. This made them easy to count for ordering. I could have devised a formula for this instead based on the volume, but since I would actually be laying each of these stones later in the field, I wanted to see them and understand how they all fit together. (I suspect that real masons would have a good laugh at my expense on that one, but I make no claim to be a “real” mason).

Building each stone made counting a breeze. Here is my list of materials:

The first two items on the list are the paver blocks. According to the counts, I needed 145 full pavers and 56 cut. This was 201 total. However I decided to order fewer than this (185 initially) since many of the cut tiles were quite small and I could get two from a single paver. During installation I damaged a couple, so I ended having to buy 4 more pavers. I used 189 total. If i had not broken or damaged any, I would have had two or three more. So my modified total was pretty much right on. Turns out I would have gotten really close to this number with the formula for the area of a circle as well. However, what the divided surface gave me over and above the count was the visualization benefits noted above. It was easier to shift the pattern and make design decisions by seeing the pattern on the surface as I worked. The count can be seen as a nice extra.

Finally, let me get to the part that gives this blog post its title: The edge stones. I wanted to do an alternating pattern of 6×6 and 6×9 stones along the circumference of the circle. Perfect job for divide and repeat. Create a circle, divide it, then create an adaptive family for one stone. Create two types, 6×6 and 6×9. Add one to one of the nodes, add the other to the other node. I think I had to add a few more to clue Revit into the pattern I wanted, but after a little trial and error, click the Repeat tool and presto! The pattern repeated around the entire circle. I also made sure that none of these needed cutting and that I never had two of the same kind next to each other (6×6, then 6×9, then 6×6, then 6×9, etc. all the way around the circle). Fiddling with the properties on the Properties palette mostly for this. I am not sure I could have worked this out so quickly without divide and repeat.

According to my paver list schedule above, I needed 50 of each size. So I ordered that exact amount.

During installation, I began laying edge stones alternating as I went and went all the way around. When I got back to where I started, this is what I had: 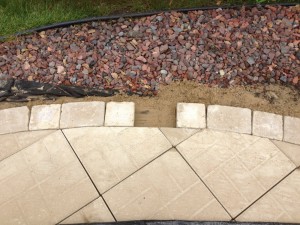 NOT BAD. My count was off by one 6×9 stone. I went and bought one more stone, and it dropped into place and fit like a glove! no cutting and the pattern intact!

Now my little project here was just a simple home improvement project. But I am always pleased when I can put BIM concepts into practice first hand. No matter how small. The fact is, it did not take me all that long do the design in Revit. And even if it did take longer than what most folks would do for a similar project, I was able to try many variations ahead of time in the system before committing. And having it all work out exactly the way I planned meant much less rework, frustration and/or settling for sub par results in the field. Believe me, it is much less strenuous to move a mouse around than to lug around extra loads of gravel, stones and pavers.

Final thoughts: Every year I find myself reaching for Revit more for things I would have just sketched out by hand in the past. The same is true for Word and Excel actually. You will find far fewer paper notes on my desk. This is not necessarily because of a conscious goal to go paperless (although I do like the idea of paperless), rather it is an ever-improving ability to “think” with a digital pencil rather than a physical one. I am not knocking pencil and paper. I think any tool that gets the ideas flowing from your brain to paper or other sharable medium is a good thing. What I am saying is that if you are like me, you may sometimes tell yourself, “oh, I won’t fire up Revit for such a simple little thing, I’ll just do it in _____”. But each time I decide to ignore that impulse and fire up Revit anyhow, I usually find myself glad that I did.

So should you do your next home improvement project in Revit? I know I will be… 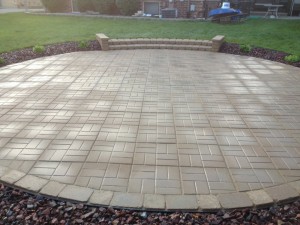